10 Health Benefits of Arugula | Is arugula good for you? 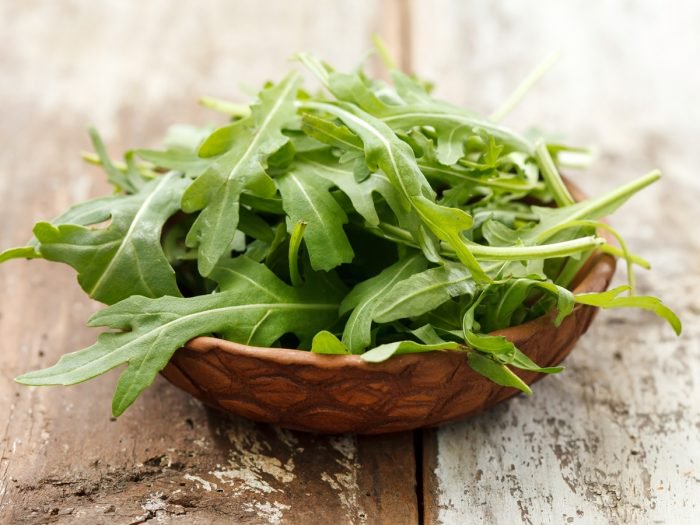 Arugula is a leafy green plant that belongs to the genus Eruca and the family Brassicaceae. It is closely related to radish, kale, and cauliflower. Arugula has a number of different names depending on what area of the world you are in.

Arugula does not hold back in making its presence known. Both nutty and a bit peppery, it adds oomph to everything from salads to pestos. Across the pond, it’s known as rocket. But Is arugula good for you? What are the health benefits of the Arugula? This salad green is low in energy density and provides you with essential nutrients, making it a healthy addition to your diet.

Arugula grows to a height of 20-100 centimeters and is recognizable by its small and white flowers. The leaves of arugula are lobed in nature, with 4-10 lateral lobes and a longer terminal lobe. It is grown on a large scale for commercial consumption but it also exists as a wild species throughout the world. It is predominantly used in the Americas, Europe, and North Africa.

To the untrained eye, arugula might just look like fancy lettuce, but not all greens are made equal, and arugula has a wide range of health benefits that frequent eaters of this cruciferous vegetable can enjoy.

There are so many Nutritional Benefits of Arugula as it is a leafy green plant packed with vitamins, minerals, and antioxidants. It is a good dietary choice for a healthy body and keeping the mind clear and focused. It contains high levels of folic acid and antioxidants like vitamin C, vitamin K, and vitamin A, which makes it integral in the fight against free radicals. It is packed with carotenoids, as well as many other minerals like potassium, manganese, iron, and calcium, all of which are beneficial and necessary elements in a person’s diet.

Arugula contains phytochemicals, which are beneficial in preventing cancer. It is also superior to some other leafy greens because unlike other varieties, arugula is low in oxalates, which are chemicals that actually inhibit the absorption of minerals into the body. All in all, arugula is a low-calorie, nutrient-rich food.

Arugula is a great source of antioxidants and can greatly increase a person’s ORAC value (Oxygen radical absorbance capacity), which is a method for measuring antioxidant capacities. Antioxidants function to maintain a healthy balance of enzyme reactions within cells, while actively seeking out and destroying the disease-causing free radicals that can attack your system. Your immune system will also thank you for choosing arugula, because antioxidants work to bolster your defenses against simple illnesses like the common cold as well as more complex afflictions, such as cancer, heart diseases, and premature aging.

The presence of vitamin K in arugula gives an anti-inflammatory boost to your body. Vitamin K also spurs an osteotropic activity in cells, meaning that promotes bone formation. The gradual degradation of neural pathways, found in conditions like Alzheimer’s disease, can be slowed down by an increase in intake of vitamin K. As a good source of Vitamin K, the consumption of arugula has been cited as a preventative method of such diseases.

Arugula’s combinative effects of low oxalate levels (allowing more minerals into the system) and the presence of so many minerals in the plant itself make it a strong support system for healthy bones. Sufferers of osteoporosis can see improvements, and arugula can be used as a preventative step as well, ensuring bone health and strength before the age/activity-based effects of bone degeneration become serious.

Arugula is loaded with vitamins and minerals that in some way bolster the defenses of the body’s immune system. The body is stimulated to create white blood cells from the copper in arugula, and the plant has a number of other ways to improve the strength of your immune system.

Vitamin C is one of the best defenses for your body to seek out dangerous, inflammatory free radicals and eliminate them from your body before they can cause real damage. This well-known vitamin is found in large quantities in arugula and helps prevent cancer and maintain good health by giving an extra push to your immune system.

The phytochemicals found in large quantities within arugula inhibit the activity of cancer-causing cells. Phytochemicals are substances like thiocyanates, sulforaphane, or indoles that are effective in countering cancer-causing tendencies in the body’s own processes. Studies suggest that these compounds help fight prostate, breast, cervical, colon, and ovarian cancers.

For mothers who are expecting, arugula is a wonderful choice to add to their diet. Folates, a classification which includes folic acid, have been shown to decrease occurrences of certain mental defects in newborns. It is rich in folates, as are many leafy vegetables.

Another benefit of arugula is the presence of B-Complex vitamins that promote metabolism. Eight B vitamins participate and aid in all different cell activities, including energy production, fat synthesis, the production of red blood cells, and many other vital processes for cell and metabolic health.

Arugula is a well-known source of carotenoids, which are naturally occurring pigments that have long been famous for improving a person’s ability to see properly. In fact, carotenoids slow down the process of macular degeneration, which is when the center of a person’s field of vision becomes compromised. In most instances, this causes cataracts, which then, have to be removed. By increasing the amount of carotenoids in your diet (and arugula is a great source for them), arugula eaters may be able to slow down this classic symptom of old age.

Arugula has a very low level of oxalates when compared to other popular leafy vegetables like spinach. Oxalates inhibit the absorption of minerals by the body’s systems, which is counterproductive to consuming minerals in the same bite. So the minerals, like copper and iron, which you get from the plant, are more easily absorbed by the body for efficient use.

The inclusion of arugula in a diet is the same as any other low-calorie, vitamin or nutrient-rich plant, and it will inevitably have a positive effect on any attempts at weight loss. By satisfying so many nutritional needs, it is an easy way to watch your health and keep your system balanced, without making drastic changes to your diet.

Several review studies have found that eating vegetables reduces a person’s risk of developing type 2 diabetes. According a report that leafy green vegetables are especially beneficial.

One test tube study showed that arugula extract had antidiabetic effects in mouse skeletal muscle cells. They produced this effect by stimulating glucose uptake in the cells.

Plus, arugula and other cruciferous vegetables are a good source of fiber, which helps to regulate blood glucose and may reduce insulin resistance. High fiber foods make people feel fuller for longer, meaning they can help tackle overeating.