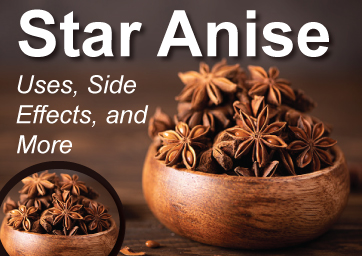 Spices are generally beneficial to one's health. Herbs and spices help to reduce inflammation and cell damage in the body. This is due to the high concentration of phytochemicals, which are beneficial plant chemicals. Star anise, derived from the fruit of the Chinese evergreen tree Illicium verum, is one such spice.

Star anise gets its name from the star-shaped pods from which the spice seeds are extracted, and it has a licorice-like flavor. It's a key ingredient in the Chinese five-spice powder and Indian garam masala. This article will tell you everything you need to know about this spice.

What is Star Anise?

In Asian cooking, star anise is a must-have spice. Many health professionals advocate for the usage of star anise because of its therapeutic properties.

Star anise is a spice and medicine that has been used for over 3,000 years. As per past records, it was people in India and China who first started using Star Anise seeds and oil. It is believed that the Chinese were aware of star anise health benefits as long as 3000 years ago.

It was only in the late 1500s that star anise finally arrived in Europe. All thanks to an English sailor who managed to traffic the spice along the China-Russia tea route.

Star anise was commonly used in jams, syrups, and puddings due to its sweet flavor, and was later used to substitute anise seed in commercial drinks.

Whole and ground star anise is used in different ways in cuisine. Whole pods are added to braised dinners, soups, and stews to infuse flavor and then removed at the end of cooking. In the same way, as other ground spices are used, star anise powder is utilized.

Because powdered star anise quickly loses its flavor after processing, buying whole star anise and grinding it as needed is preferable. In a grinder, add together the pods and seeds and grind well to make your own spice with great aroma and flavor.

It has a sweet, licorice-like flavor that is similar to aniseed, and it can be found in both the seeds and the star itself.

What is Star Anise Extract?

Anise extract is a flavoring made from anise or star anise, which is often used in cooking. It has a strong, somewhat sweet licorice flavor due to the presence of an aromatic component called anethole, which is also found in fennel, tarragon, and licorice.

While some anise extracts may contain artificial licorice flavoring, the vast majority are pure and made with all-natural ingredients. It's found in baked goods all across the world, and it's also occasionally used to flavor whiskey and herbal liqueurs.

What is Star Anise Used For?

In both Indian and Chinese cuisines, anise is widely used as an exotic spice. It's often utilized in biryanis, chicken, seafood, and other vegetarian dishes because of its powerful, pleasant aroma.

The star anise extracts are also used for fragrance in cosmetics, perfumes, and toothpaste. It is also used to conceal unpleasant scents in pharmaceuticals.

Apart from great taste and fragrance, this little flower-like spice is also a repository of some vital nutrients that can help treat a variety of ailments.

What is Star Anise Good For?

It possesses antifungal, antibacterial, and anti-inflammatory properties and may aid in the treatment of stomach ulcers, blood sugar control, depression, and menopause symptoms. It has the ability to enhance a number of aspects of your health when combined with a balanced diet and a healthy lifestyle. 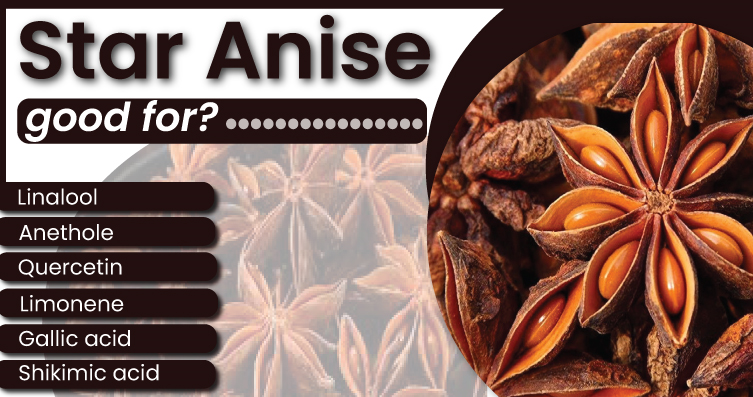 Some of the key health-promoting compounds found in star anise include:

●          Quercetin is a flavonoid that is used to treat heart and blood vessel problems as well as to prevent cancer.

●          Anethole is responsible for the spice's characteristic flavor and also has antifungal properties.

● Gallic acid, commonly known as the ayurvedic herb, is a natural antioxidant that is particularly good for problems such as obesity and brain health.

●          Limonene is beneficial to the heart and coronary arteries.

All of these substances may work together to give star anise its antioxidant, anti-inflammatory, and antibacterial benefits.

The following are some of the remarkable benefits of star anise:

●        It's possible that it will aid in the reduction of depressive symptoms.

●      It aids in the prevention of fungal and bacteria growth, as well as the regulation of blood sugar levels in the body.

The oil produced from star anise contains thymol, terpineol, and anethole. It can be useful in:

The floral water from the star anise is obtained through steam distillation. It's a pure essential oil that's often used in the production of organic medications. Chinese medical traditions recommend its use in treating cuts and wounds.

Star anise water and oil, when used on a regular basis, can help to maintain skin health as well as repair damaged hair and encourage hair development.

Star anise has always been a part of Chinese and Indian medicinal traditions. It has been used to cure respiratory infections, nausea, constipation, and other digestive issues.

According to Ayurveda, star anise may have sedative properties, which may help your nerves settle down and ensure a good night's sleep. If you're having difficulties sleeping, try a cup of soothing star anise tea before bed.

Ground star anise can be purchased at most supermarkets. If you're buying whole star anise, double-check that the pods aren't broken. The star anise, whether whole or crushed, should have a strong aroma.

●    Store in air-tight containers only.

●    If stored for more than 3 months, the pods lose flavor

To be on the safe side, double-check the source of the star anise you're buying to make sure it's the Chinese variety.

If you're not sure about the source or purity, it's also a good idea not to use too much at once to avoid intoxication.

There have also been cases of infants having severe, potentially fatal responses to star anise. As a result, star anise should not be given to newborns or children

It would be hard to not find Star Anise in an Asian kitchen. For centuries, it has been the ideal home remedy for a slew of day-to-day health issues. And, given the many health benefits, there is no reason why Star Anise should not be part of your diet as well.

We hope that we were able to perfectly highlight star anise uses as well its potential risks. If you have any questions or want to know more about the benefits of star anise, feel free to share your thoughts in the comment section.