Eat healthy and try some yoga for a perfect body 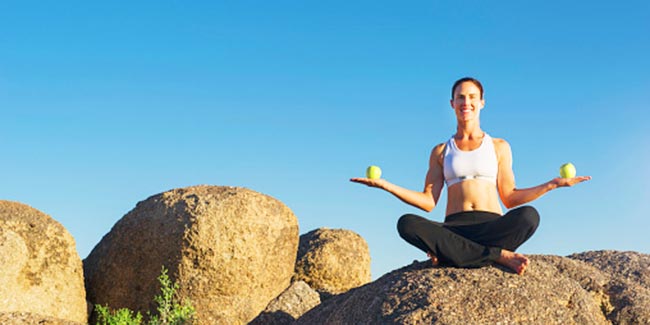 A fashion news flash recently announced how most of the glam set, wanting to scorch the beach front, had plunged into fad diets and intense exercise so that they could squeeze into their skimpy swimwear. Here are a few tricks from yoga to get you bikini-ready and a torso like JLO.

Herbal menu:- Herbal teas like those made from fennel, green tea, aniseed, cinnamon, and ginger may be preferred because they are natural themogenics. This means they rev up the body's mechanism, hiking metabolism, helping with fat burn.

Some detox refreshers:- Cranberry juice (to keep kidneys super-efficient), a green tonic (of either palak, coriander or mint) for great skin and eyes; a regular intake of lettuce (for clear skin and eyes). Also a glass of water with freshly squeezed lime first thing in the morning is a great detoxifies. Do not consume anything after this for at least an hour.

A crucial point while holding a pose is to remember to breathe evenly. Else, it will be counterproductive, building up toxic waste and lactate levels in the blood, leading to ugly cellulite. So, breathe evenly. Efficient breathing also revs up the metabolism, which in turn bums fat. Now for the hip trimming poses: Nirlamba Supta Pa wan Muktasana: A hip-trimmer variation of a classic pose. Lie on your back. Inhale. Exhaling, fold legs at knee, hugging them. Release hands, but keep folded knees up. You may place palms flat on the ground, along side the body.

Gently lift off hips, so it is a few inches off the floor. Hold for as long as you can. Do thrice. Later include this in between every set of other exercises, to intensify its hip-trimming and thigh-slimming effects. Have a glass of water with freshly squeezed lime first thing in the morning. Foods to avoid while toning up (they can aggravate dehydration and weakness): fizzy drinks, all caffeine based stuff, including coffee and soft drinks, white bread and processed foods. Processed foods will aggravate waste build-up, leading to dimpled cellulite.

Body-toner Utkatasana (chair squat) another variation of a classic pose, modified to use wall support so you can hold it for longer, to accrue benefits from it like leg-toning. Holding it longer accentuates its effect as a complete body workout.Stand up straight against the wall. Inhale, raising hands overhead, clasping them together in a namaste gesture. Exhaling, slowly lower yourself in a squat, sliding against the wall. On the first few attempts; do not squat too low, especially if you have a weak back. Go only as low as you can. Stop and press your back against the wall. Legs will be bent at knees. Soles will be flat on ground. Breathe and hold for as long as you can. Relax to starting position. Repeat thrice. It is a complete body-toner, especially wearing out fat in trouble spots like back of the thighs, inside of thighs, inner legs, sides of waist and inner arms.