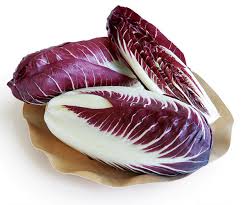 So, what is this plant that looks deceptively like red cabbage? Radicchio is the Italian word referring to the cultivated leaf plants of chicory, specifically found in Italy. Its characteristically bitter taste makes it a welcome ingredient in fresh salads, and it also pairs well sautéed with various other ingredients. At only nine calories per cup (one serving), it’s a great, flavorful addition to recipes for those trying to lose or maintain weight.While the price tag can be a bit high, you don’t need a lot of this delicious ingredient to create a great punch in your dishes — plus, it’s an excellent source of nutrition with proven health benefits.Radicchio has been known as a healthy food for quite some time. In fact, Pliny the Elder, a Roman author and natural philosopher, claimed in his encyclopedia, “Natural History,” that it was useful to purify the blood and treat insomnia. (1) While this document was written during the first century, it’s actually true that one nutrient found in the radicchio plant, intybus, is a mild pain reliever and sedative. (2)Regular cultivation began in the 15th century and continues today. In 1977, New York Times food editor Craig Claiborne “discovered” radicchio on a trip to Italy, after which this handy ingredient found its way into many Western kitchens and restaurants. (3)You may be surprised by how incredibly beneficial this leaf (neither a lettuce nor a cabbage, but delicious all the same) can be for your health.

1. Fights the Growth of Cancer Cells

If you spend much time here, you probably know that I’m a firm believer in treating disease with nutrition, and that’s no different when it comes to cancer. There are many natural treatments for cancer, and I find that a large majority of whole, life-giving foods are often associated with a reduced risk of specific cancers or hold potential cancer-killing benefits. This one is no different.

For people with liver cancer, a regular radicchio salad may be just what you need on your meal plan. The antioxidants contained in this vegetable have been found to fight a particular, very common liver cancer cell known as Hep-G2. Interestingly (but not at all surprisingly), when the chicory plant is fertilized without being exposed to pesticides, the antioxidants that fight this line of cancer are found in higher quantities, meaning it’s worth it to buy this food organic whenever possible. (4)

In a study regarding an extract of chicory, researchers discovered a significant effect on colon cancer, particularly in the early stages of cancer onset. The results suggested the plant-based sugars found in radicchio, known as fructans, may serve to reduce the risk and/or impact of colon cancer. (5)

Radicchio also contains one of the highest amounts of vitamin K in one serving that you can find. Vitamin K is known to reduce the risk of prostate, colon, stomach, nasal and oral cancers.

The antioxidants found in chicory are useful for more than just fighting cancer. When fighting free radical damage, radicchio exerts a repairing effect on specific kinds of liver injury caused by oxidative stress. (6)

Radicchio also contains a large amount of lutein and zeaxanthin, which are specifically known as the antioxidants responsible for keeping your eyes healthy. At 3.5 grams per serving, this leafy plant is surpassed by only about four other foods when it comes to the presence of lutein.

3. Good for the Heart

The radicchio plant is known as one food found in large amounts in the Mediterranean diet, a lifestyle of delicious foods that has been praised for its ability to help manage weight and fight disease while still providing filling, yummy meals. This diet is also known to support a healthy heart, reducing the risk of heart disease by as much as 30 percent and the risk of sudden cardiac death by 45 percent. (7)

While there are many factors that contribute to the health of this diet, it turns out that radicchio may be one unsung hero in the ability of the Mediterranean diet to keep your heart healthy. In a rat study, scientists discovered that chicory exhibited heart-protecting effects, including reducing lesion size on damaged hearts, reducing inflammation and decreasing cholesterol levels within the heart. (8)

Vitamin K is also a contributing factor to the benefits of this vegetable for the heart. Vitamin K helps prevent the calcification of arteries, reduces inflammation of cells lining blood vessels, and contributes to a healthy blood pressure and decreased risk of heart attack.

Another benefit of radicchio is its ability to help your body build and maintain strong bones. This is due, in part, to the high presence of vitamin K in every serving. Vitamin K is useful in the treatment and prevention of osteoporosis as it helps to increase bone mineral density. This nutrient also allows your body to better absorb calcium, which is also important when building dense bones. (9)

In a pilot study in 2016, radicchio was studied in regard to its impact on parasites. Researchers found a significant anti-parasitic effect of the plant on a particular type of roundworm common in swine. This discovery may indicate a potential benefit of the plant to fight other parasitic growths. (10)