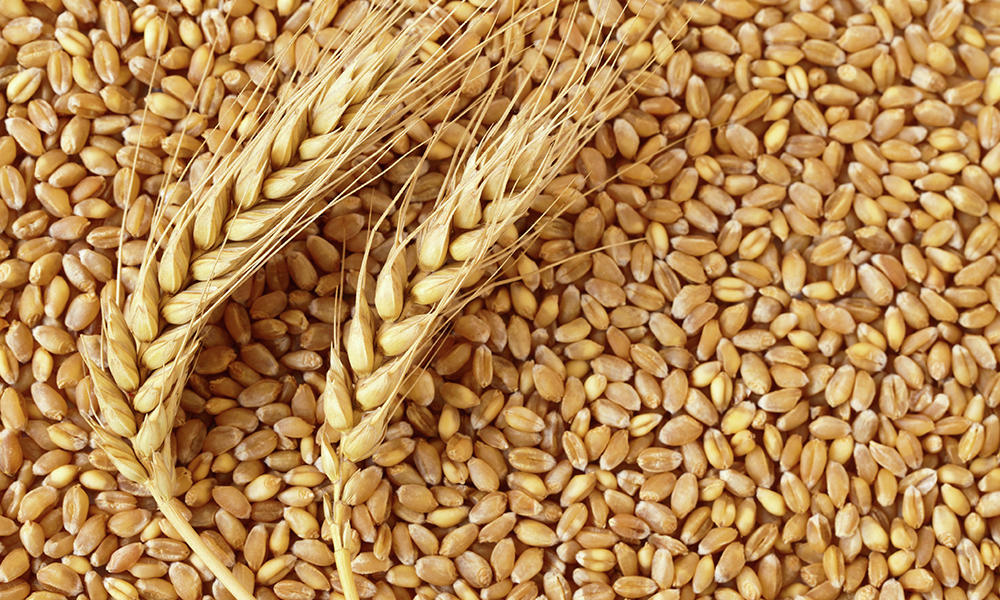 Wheat is one of the world's most commonly consumed cereal grains.

It comes from a type of grass (Triticum) that is grown in countless varieties worldwide.

Bread wheat, or common wheat, is the most common species. Several other closely related species include durum, spelt, emmer, einkorn, and Khorasan wheat.

White and whole wheat flour are key ingredients in baked goods, such as bread. Other wheat-based foods include pasta, noodles, semolina, bulgur, and couscous.

Wheat is highly controversial because it contains a protein called gluten, which can trigger a harmful immune response in predisposed individuals.

However, for people who tolerate it, whole-grain wheat can be a rich source of various antioxidants, vitamins, minerals, and fibers.

Wheat is mainly composed of carbohydrates, but also has moderate amounts of protein.

The table below contains information on all the main nutrients in wheat (1).

Like all cereal grains, wheat is mainly composed of carbs.

Refined white wheat does not have any beneficial health properties.

On the other hand, eating whole-grain wheat may have several health benefits for those who can tolerate it, especially when it replaces white wheat.

Whole-grain wheat is rich in fibers, mostly insoluble, that are concentrated in the bran.

Studies indicate that components of wheat bran may function as prebiotics, feeding the beneficial bacteria residing in the gut (8).

However, most of the bran passes virtually unchanged through the digestive system, increasing fecal weight (6, 7).

Wheat bran may also shorten the time it takes undigested material to travel through the digestive tract, while slowing down transit times that are very fast (4, 26).

One study found that bran can reduce the risk of constipation in children (27).

However, depending on the underlying cause of the constipation, eating bran may not always be effective (28).

Colon cancer is the most common type of cancer in the digestive system.

One observational study estimated that people on low-fiber diets could cut the risk of colon cancer by 40% by eating more fiber (31).

This is supported by randomized controlled trials (6), but not all studies have found a significant protective effect (32).

One thing is clear, whole-grain wheat is rich in fiber and contains a number of antioxidants and phytonutrients that may help prevent colon cancer (23, 33).

In many people, gluten may trigger a harmful immune response, a condition known as celiac disease.

Other types of gluten intolerance include non-celiac gluten sensitivity, which is of a different nature and has an unknown cause.

Celiac disease is a chronic condition, characterized by a harmful immune reaction to gluten.

Gluten, the main family of proteins in wheat, can be divided into glutenins and gliadins, which are present in varying amounts in all types of wheat.

The gliadins are considered to be the main cause of celiac disease (37, 38).

It has also been suggested that gluten may contribute to brain disorders, such as schizophrenia and epilepsy (40, 41, 42).

Einkorn, a primitive wheat variety, causes weaker reactions than other varieties, but is still not suitable for people with gluten intolerance (43).

Adhering to a gluten-free diet is the only known treatment for celiac disease. Wheat is the main dietary source of gluten, but it can also be found in rye, barley and many processed foods.

The number of people that follow a gluten-free diet exceeds those who have celiac disease.

Sometimes, the reason may be the mere belief that wheat and gluten are inherently harmful to health. In other cases, wheat or gluten may cause actual symptoms, similar to those of celiac disease.

This condition has been called gluten sensitivity, or non-celiac wheat sensitivity, and is defined as an adverse reaction to wheat without any autoimmune or allergic reactions (36, 44, 45).

One study indicates that, in some people, the symptoms of wheat sensitivity may be triggered by substances other than gluten (46).

Digestive symptoms may be due to a family of soluble fibers in wheat, so-called fructans, which belong to a class of fibers known as FODMAPs.

High dietary intake of FODMAPs exacerbates irritable bowel syndrome, a condition that has symptoms similar to those of celiac disease (9).

In fact, gluten or wheat sensitivity has been estimated to be present in approximately 30% of people suffering from irritable bowel syndrome (47, 48).

It is more common in people that suffer from anxiety and is often triggered by a stressful life event (49).

Sensitivity to wheat is common among people with irritable bowel syndrome (47, 50).

One of the reasons for this may be that wheat contains soluble fibers called fructans, which are FODMAPs (9, 46, 51).

Diets that are high in FODMAPs may exercerbate the symptoms of irritable bowel syndrome (52).

Although FODMAPs make symptoms worse, they are not considered to be the underlying cause of irritable bowel syndrome.

Studies indicate that irritable bowel syndrome may be associated with low-grade inflammation in the digestive tract (53, 54).

In one 6-week trial in 20 men and women with irritable bowel syndrome (IBS), eating Khorasan wheat (Kamut) instead of common wheat, lowered inflammation and alleviated many symptoms of IBS (55).

It is unclear which properties of Khorasan wheat are responsible for these differences. This requires further study.

If you have irritable bowel syndrome, limiting wheat consumption may be a good idea.

Food allergy is a common condition, triggered by a harmful immune response to certain types of proteins in foods.

Gluten in wheat is a common allergen, affecting approximately 1% of children (56).

In adults, allergy is most often reported among those who are regularly exposed to air-borne wheat dust.

Baker's asthma and inflammation inside the nose (rhinitis) are typical allergic reactions to wheat dust (57).

Whole-grain wheat contains phytic acid (phytate), a nutrient that impairs the absorption of minerals, such as iron and zinc, from the same meal (21).

For this reason, it has been referred to as an antinutrient.

This is usually not a problem in well-balanced diets, but may be a concern in diets that are largely based on cereal grains and legumes.

The phytic acid content of wheat can be reduced considerably by soaking and fermenting the grains (21).

For example, the phytate content of fermented sourdough bread may be reduced by 90% (58).

Spelt is a primitive variety of wheat, closely related to the common wheat.

It has been grown since ancient times and although its popularity declined during the past century, it has been making a comeback as a health food (59).

Their protein and fiber content is similar, although this depends on which varieties of spelt and common wheat are being compared (59, 60, 61).

There is one thing that seems to set them apart. Spelt may be richer in some minerals, such as zinc (61, 62).

In fact, studies indicate that modern wheat may be lower in minerals than many other primitive types of wheat (62, 63).

Other than having a higher mineral content, the health benefits of eating spelt, rather than whole-grain common wheat, are unclear.