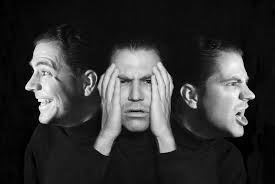 Bipolar disorder isn’t a rare diagnosis. A 2005 study found that 2.6 percent of the U.S. population, or more than 5 million people, are living with some form of bipolar disorder. Symptoms tend to appear in a person’s late teens or early adult years, but they can occur in children as well. Women are more likely to receive bipolar diagnoses than men, though the reason for this remains unclear.

Bipolar disorder can be hard to diagnose, but there are warning signs or symptoms that you can look for.

Mania can cause other symptoms as well, but seven of the key signs of this phase of bipolar disorder are:

feeling overly happy or “high” for long periods of time
having a decreased need for sleep
talking very fast, often with racing thoughts
feeling extremely restless or impulsive
becoming easily distracted
having overconfidence in your abilities
engaging in risky behavior, such as having impulsive sex, gambling with life savings, or going on big spending sprees

Like mania, depression can cause other symptoms as well, but here are seven of the key signs of depression from bipolar disorder:

feeling sad or hopeless for long periods of time
withdrawing from friends and family
losing interest in activities that you once enjoyed
having a significant change in appetite
feeling severe fatigue or lack of energy
having problems with memory, concentration, and decision making
thinking about or attempting suicide, or having a preoccupation with death