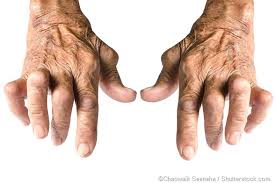 Rheumatoid arthritis (RA) is a long-term autoimmune disorder that primarily affects joints. It typically results in warm, swollen, and painful joints. Pain and stiffness often worsen following rest. Most commonly, the wrist and hands are involved, with the same joints typically involved on both sides of the body. The disease may also affect other parts of the body. This may result in a low red blood cell count, inflammation around the lungs, and inflammation around the heart. Fever and low energy may also be present. Often, symptoms come on gradually over weeks to months.
While the cause of rheumatoid arthritis is not clear, it is believed to involve a combination of genetic and environmental factors. The underlying mechanism involves the body's immune system attacking the joints. This results in inflammation and thickening of the joint capsule. It also affects the underlying bone and cartilage. The diagnosis is made mostly on the basis of a person's signs and symptoms. X-rays and laboratory testing may support a diagnosis or exclude other diseases with similar symptoms. Other diseases that may present similarly include systemic lupus erythematosus, psoriatic arthritis, and fibromyalgia among others.