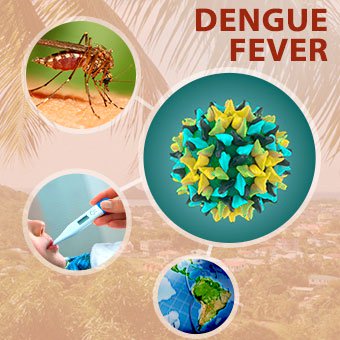 Dengue fever is a disease caused by a family of viruses transmitted by mosquitoes. It is an acute illness of sudden onset that usually follows a benign course with symptoms such as headache, fever, exhaustion, severe muscle and joint pain, swollen lymph nodes (lymphadenopathy), and rash. The presence of fever, itchy rash, and headache (the "dengue triad") is characteristic of dengue. Other signs of dengue fever include bleeding gums, severe pain behind the eyes, and red palms and soles.

Dengue (pronounced DENG-gay) can affect anyone but tends to be more severe in people with compromised immune systems. Because it is caused by one of five serotypes of the dengue virus, it is possible to get dengue fever multiple times. However, an attack of dengue produces immunity for a lifetime to that particular viral serotype to which the patient was exposed.

Dengue goes by other names, including "breakbone fever" or "dandy fever." Victims of dengue often have contortions due to the intense pain in the joints, muscles, and bones, hence the name breakbone fever. Slaves in the West Indies who contracted dengue were said to have dandy fever because of their postures and gait.