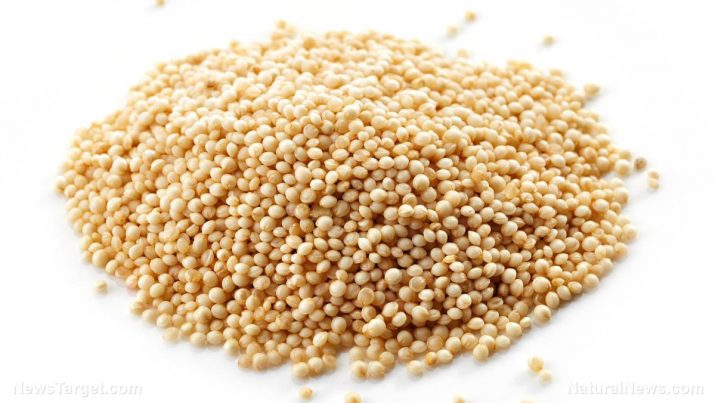 It’s getting hard to keep track of the super grains, we know, but we promise, amaranth is worth learning about. This tiny-but-powerful food has some similarities to quinoa — both are good protein sources and are naturally gluten-free — but it also boasts some impressive nutritional stats of its own.

You’ll start seeing it pop up in processed foods like granola bars, but it’s also great to eat on its own, and can be prepared a few different ways. There’s a reason (actually, by our count at least 14 of them) that it’s been around for millennia

1. It Was An Aztec Staple: Amaranth was a key part of the diets of the pre-Columbian Aztecs, and it was used not just for food but also as part of their religious ceremonies. Sadly, when Cortez and the Spanish conquistadors arrived in the 16th century, amaranth crops were burned and its use forbidden. Fortunately, the plant was never quite eliminated.

2. It’s Actually A Seed: Like quinoa, amaranth is not technically a grain but is the seed of the amaranth plant. One plant can produce up to 60,000 seeds.

3. Amaranth Is Gluten-Free: Amaranth doesn’t contain any gluten, which makes it a great choice for people who are celiac or gluten intolerant and an excellent way to boost the nutritional power of gluten-free recipes.

4. It Contains Lysine: Most grains like wheat are short on lysine, an amino acid, but that’s not the case for amaranth. This makes amaranth a complete protein, because it contains all the essential amino acids.

5. Amaranth Contains Protein: Amaranth’s protein content is about 13 percent, or 26 grams per cup, which is much higher than for most other grains. To compare, a cup of long-grain white rice has just 13 grams of protein.

6. The Plant Is Hardy: Amaranth prefers a high elevation, but can grow at almost any elevation in temperate climates if it has moist, loose soil with good drainage. It can also survive in low-water conditions once the plants have been established.

7. You Can Eat Other Parts Of The Plant: Amaranth seeds may be the best-known part of the plant, which has more than 60 different species, but the leaves are also edible. They’re commonly used in Asian and Caribbean cuisines — try them stir-fried or chopped and added to soup.

8. It’s A Source Of Key Vitamins And Minerals: Amaranth contains calcium, magnesium, potassium, phosphorus, and iron. One cup of uncooked amaranth has 31 percent of the RDA for calcium, 14 percent for vitamin C, and a whopping 82 percent for iron.

9. Humans Have Eaten It For Millennia: It’s estimated that amaranth was first domesticated 6,000 to 8,000 years ago, which means we’ve been eating it for a very long time. Considering how easily and quickly it grows, that makes sense!

10. Amaranth Can Be Popped: Popped amaranth is used in Mexico as a topping for toast, among other things. It looks like tiny popcorn kernels and has a nutty taste, and you can even do it yourself at home.

11. It Grows Around The World: Though amaranth is considered a native plant of Peru, it is now grown around the world in countries including China, Russia, Thailand, Nigeria, and Mexico. It has also become a part of the cuisines of parts of India, Nepal, and the African continent. There are even farmers growing it in parts of the United States, including Nebraska and North Dakota.

13. It’s A Great Breakfast Option: Amaranth’s tiny grains take on a porridge-like texture when cooked, making it a great option for your first meal of the day, like this recipe from Jeannette's Healthy Living. In fact, amaranth porridge is a traditional breakfast in India, Peru, Mexico, and Nepal.

14. And It Can Help Keep You Regular: Among its other impressive nutritional stats, amaranth is also a source of fibre with 13 grams of dietary fibre per uncooked cup compared to just 2 grams for the same amount of long-grain white rice.