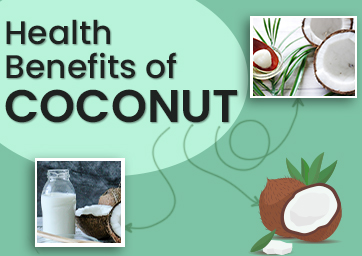 Coconut is a fruit which belongs to the Cocos nucifera palm. This mature nut is one of the most used ingredients in the kitchens of India. Hundreds of coconut species are found all over India and its taste vary according to its soil alkalinity. Its outer part is of green in colour which turns brown as it matures. Underneath the hard shell is the white edible meat.

Wondering how to eat coconut? The freshly harvested coconut contains sweet water which is extremely beneficial for health. Coconut is a healthy nut that can be used safely as a food. It is mainly reaction free.

Coconuts are highly nutritious and rich in fibre, vitamins C, E, B1, B3, B5 and B6 and minerals including iron, selenium, sodium, calcium, magnesium and phosphorous.
Unlike cow's milk, coconut milk is lactose free so can be used as a milk substitute by those with lactose intolerance.

How Do you Choose the Best Coconut

Coconut oil was once a heart-health “don’t” thanks to its 87 percent saturated-fat content. Solid at room temperature, it’s making a comeback in some packaged foods and for cooking and baking. While it may be marketed as helpful for cholesterol levels, some nutrition experts disagree about the health benefits of coconut oil. “Coconut oil contains a mixture of saturated fatty acids, some of which don’t adversely affect cholesterol levels,” says Joy Dubost, Ph.D., R.D., a spokesperson for the Academy of Nutrition and Dietetics. “But while its predominant saturated fat —lauric acid—does raise beneficial HDL cholesterol, it also raises harmful LDL cholesterol, which can increase the risk of heart disease.” Look for coconut oil, in jars or tubs, near other cooking oils in large supermarkets, in the natural-foods section, or in natural-foods stores. Wondering how to cook with coconut oil? In our healthy coconut-oil recipe for Coconut-Carrot Morning Glory Muffins, we use coconut oil sparingly, in place of butter or other oils.

Coconut milk is made from a brew of coconut meat and water. But don’t confuse it with lower-calorie coconut water. Rich and thick and more like cream than milk, coconut milk packs an eye-opening 445 calories and 48 grams of fat (43 grams saturated) per cup. That’s where “lite” coconut milk comes in: you can substitute “lite” coconut milk for traditional coconut milk to trim roughly two-thirds the fat and calories without sacrificing flavor, as we do in our healthy coconut-milk recipe for Coconut-Milk Chicken Curry.

Coconut water has gotten a lot of buzz for its purported health benefit as a “natural” sports drink. It is a great hydrator for light workouts, as 1 cup serves up more than 10 percent of your daily dose of potassium—an electrolyte you lose through sweat.

(Just be mindful that 8 ounces of coconut water delivers 45 calories.) But it won’t do the job if you’re sweating up a storm. Why? When we sweat we lose up to 10 times more sodium than potassium. And coconut water only contains about 30 mg of sodium per cup, whereas sports drinks usually deliver about 110 mg. In your market, look for coconut water without added sugar in the refrigerated section near other flavored waters or near shelf-stable waters and natural fruit juices. You can use coconut water in smoothies, as we do in our healthy recipe for Creamsicle Breakfast Smoothie.

Once the outer green husk of the coconut is removed, what remains is the seed and its rich inner white lining, the coconut meat. If you’re eating a low-carb diet, you’ll be happy to know each 2-by-2-inch piece of raw fresh coconut meat contains only about 7 grams of carbohydrate (less than a third of what you’d get from a medium apple) and is jammed with 4 grams of fiber (16 percent of your daily dose). On the flip side, coconut meat is the nutritional opposite of what you’d expect from a fruit: what it lacks in carbohydrates, it makes up for in fat with 15 grams of fat per 2-inch chunk of coconut, most of which is unhealthy saturated fat. Another reason to not eat coconut meat with abandon: that little piece sports 160 calories.

To toast dried shredded coconut or dried coconut flakes, cook in a small dry skillet over medium-low heat, stirring constantly, until fragrant and lightly browned, 2 to 5 minutes or spread in a shallow baking dish and bake at 350 degrees until light golden and fragrant, 5 to 10 minutes. You can use dried shredded coconut or coconut flakes in cooking and baking, as in our healthy recipe for Baked Coconut Shrimp with Tangelo Salsa. 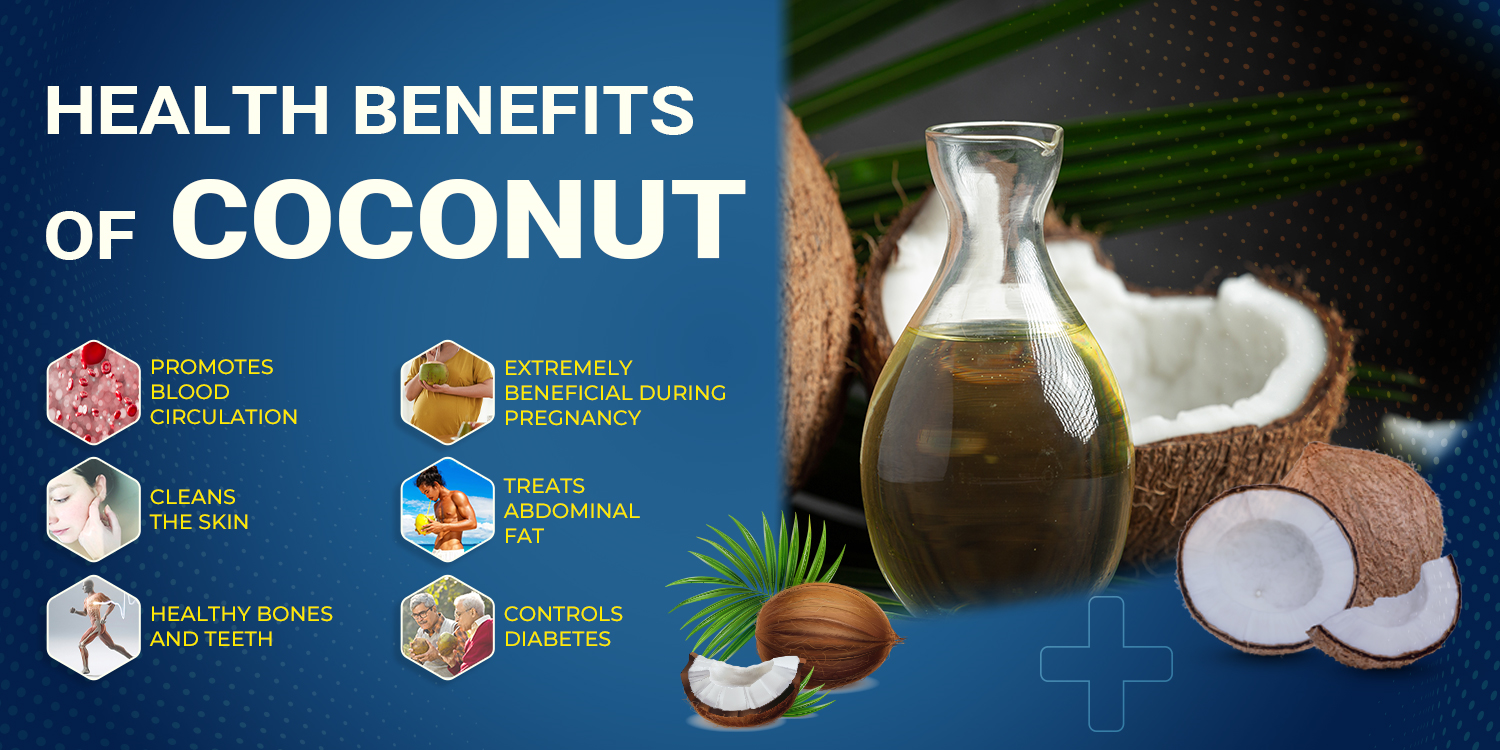 Eating coconut hydrates the skin and makes it youthful and supple. Take a teaspoon of raw, uncooked coconut oil and massage the skin with it. This will minimise the outbreaks of skin, rashes and irritations and will beautify the skin from inside when taken internally.

It improves the moisture and lipid content in the skin and prevents skin cancer by blocking 20% of harsh Ultra Violet rays. It can be used as a body and skin moisturiser as it hydrates the skin by replenishing the natural oils. Coconut oil can also be used to clean the face by rubbing it in circular motions.

Eating coconuts regularly supports the development of healthy bones and teeth. It improves the body’s ability to absorb calcium and manganese which aid bone development. It also prevents osteoporosis, a condition which makes the bones thin and fragile and loses its density. Thus it is a healthy alternative for those who are lactose intolerant.

Coconut water is sterile and is very good for pregnant ladies. It improves the immunity and health of the mother and baby and prevents infection and other diseases. It also boosts the levels of amniotic fluid to improve the overall health of the fetus.

Coconut water is considered to be more nutritious and healthier than whole milk. It contains lauric acid which is considered equivalent to mother’s milk. It is naturally sterile as it permeates through the filtering husk. It also cures hangover. Coconut water has a natural isotonic beverage in the same level as that in the blood.

A ketogenic diet is a low carb diet which is used to treat various disorders. Its best known application is treating epilepsy in children. The diet involves eating little carbs and large amounts of fat which can lead to increased concentrations of ketone bodies in the blood. This diet can dramatically reduce the rate of seizures in epileptic children.

Coconut is also beneficial in treating dangerous fats in the abdominal cavity. Abdominal fats are the most dangerous of all the fats and are associated with various diseases. A 200 grams of coconut serving daily can lead to significant reduction in both BMI and waist circumference in just 12 weeks.

Coconut is high in dietary fibre and provides a whopping 61% of fibre. Coconut fibre slows down the release of glucose and transports it to the cell were it is converted into energy. It assists in relieving stress on the pancreas and enzyme systems which reduces the risk of developing diabetes.

Coconut improves the insulin secretion and utilization of blood glucose. It controls diabetes by positively affecting the hormones for blood sugar control. This slows down the rise in blood sugar level and helps to reduce glycemic cravings. Coconut benefits quick digestion and other symptoms associated with digestive and bowel disorders. It supports absorption of nutrients and minerals while providing dietary fibre. It also reduces vomiting and nausea.

Coconut nutrition is excellent for the immunity system. It is antiviral, antifungal, anti-bacterial, and anti-parasitic. Intake of coconut oil can help the body to mount resistance to both viruses and bacteria that cause illness. That said, can you eat raw coconut? Consuming coconut in its raw form can help to treat some of the worst and most resilient illness like throat infections, bronchitis, urinary tract infection, tapeworms and other ailments caused by microbes.