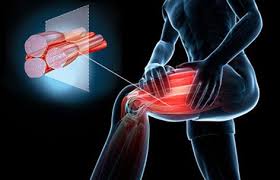 An involuntarily and forcibly contracted muscle that does not relax. When we use the muscles such as those of our arms and legs that can voluntarily be controlled, they alternately contract and relax as we move our limbs. Muscles that support our head, neck, and trunk contract similarly in a synchronized fashion to maintain our posture. A muscle (or even a few fibers of a muscle) that involuntarily (without consciously willing it) contracts is called a "spasm." If the spasm is forceful and sustained, it becomes a cramp. Muscle cramps can last anywhere from a few seconds to a quarter of an hour, and occasionally longer. It is not uncommon for a cramp to recur multiple times until it finally goes away. The cramp may involve a part of a muscle, the entire muscle, or several muscles that usually act together, such as those that flex adjacent fingers. Some cramps involve the simultaneous contraction of muscles that ordinarily move body parts in opposite directions. Muscle cramps are very common and become increasingly frequent with age. Any muscle under voluntary control (skeletal muscle) can cramp. The legs and feet, and particularly the calf (the classic "charley horse"), are especially subject to cramps.

Overuse of a muscle, dehydration, muscle strain or simply holding a position for a prolonged period can cause a muscle cramp. In many cases, however, the cause isn't known.

Although most muscle cramps are harmless, some may be related to an underlying medical condition, such as:

Inadequate blood supply. Narrowing of the arteries that deliver blood to your legs (arteriosclerosis of the extremities) can produce cramp-like pain in your legs and feet while you're exercising. These cramps usually go away soon after you stop exercising.
Nerve compression. Compression of nerves in your spine (lumbar stenosis) also can produce cramp-like pain in your legs. The pain usually worsens the longer you walk. Walking in a slightly flexed position — such as you would use when pushing a shopping cart ahead of you — may improve or delay the onset of your symptoms.
Mineral depletion. Too little potassium, calcium or magnesium in your diet can contribute to leg cramps. Diuretics — medications often prescribed for high blood pressure — also can deplete these minerals.