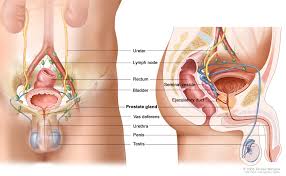 Prostate cancer is the development of cancer in the prostate, a gland in the male reproductive system. Most prostate cancers are slow growing; however, some grow relatively quickly. The cancer cells may spread from the prostate to other parts of the body, particularly the bones and lymph nodes. It may initially cause no symptoms. In later stages it can lead to difficulty urinating, blood in the urine, or pain in the pelvis, back or when urinating. A disease known as benign prostatic hyperplasia may produce similar symptoms. Other late symptoms may include feeling tired due to low levels of red blood cells.
Factors that increase the risk of prostate cancer include: older age, a family history of the disease, and race. About 99% of cases occur in those over the age of 50. Having a first-degree relative with the disease increases the risk two to threefold. In the United States, it is more common in the African American population than the white American population. Other factors that may be involved include a diet high in processed meat, red meat, or milk products or low in certain vegetables. An association with gonorrhea has been found, but a reason for this relationship has not been identified. Prostate cancer is diagnosed by biopsy. Medical imaging may then be done to determine if the cancer has spread to other parts of the body.