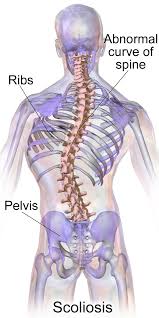 Scoliosis is a disorder that causes an abnormal curve of the spine, or backbone. The spine has normal curves when looking from the side, but it should appear straight when looking from the front. Kyphosis is a curve in the spine seen from the side in which the spine is bent forward. There is a normal kyphosis in the middle (thoracic) spine. Lordosis is a curve seen from the side in which the spine is bent backward. There is a normal lordosis in the upper (cervical) spine and the lower (lumbar) spine. People with scoliosis develop additional curves to either side of the body, and the bones of the spine twist on each other, forming a "C" or an "S" shape in the spine.

Scoliosis is about two times more common in girls than boys. It can be seen at any age, but it is most common in those over about 10 years of age. Scoliosis is hereditary in that people with scoliosis are more likely to have children with scoliosis; however, there is no correlation between the severity of the curves from one generation to the next.