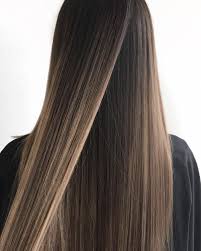 Hair straightening is a hair styling technique used since the 1890s involving the flattening and straightening of hair in order to give it a smooth, streamlined, and sleek appearance. It became very popular during the 1950s among black males and females of all races. It is accomplished using a hair iron or hot comb, chemical relaxers, Japanese hair straightening, Brazilian hair straightening, or roller set/blowdryer styling. In addition, some shampoos, conditioners, and hair gels can help to make hair temporarily straight.
The process is often called "rebonding" in some countries from Southeast Asia (e.g. Indonesia, Singapore, Malaysia and Philippines). The term "rebonding" was first used by REDS Hairdressing from Singapore in the late 1980s,[citation needed] which slowly spread to the rest of the region. If done often, flat irons and chemicals can be damaging to hair. Excessive straightening often results in split ends. However, heat protectant sprays can decrease the damage.