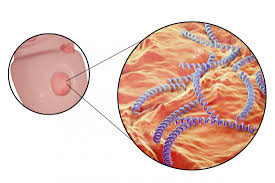 Syphilis is a sexually transmitted infection (STI) caused by a type of bacteria known as Treponema pallidum. In 2016, more than 88,000 cases of syphilis were reported in the United States, according to the Centers for Disease Control and Prevention. The rate of women with syphilis has been declining in the United States, but the rate among men, particularly men who have sex with men, has been rising. The first sign of syphilis is a small, painless sore. It can appear on the sexual organs, rectum, or inside the mouth. This sore is called a chancre. People often fail to notice it right away.Syphilis can be challenging to diagnose. Someone can have it without showing any symptoms for years. However, the earlier syphilis is discovered, the better. Syphilis that remains untreated for a long time can cause major damage to important organs, like the heart and brain.Syphilis is only spread through direct contact with syphilitic chancres. It can’t be transmitted by sharing a toilet with another person, wearing another person’s clothing, or using another person’s eating utensils